Global Philanthropy Project and APCOM invite you to register for the Donor Engagement event and APCOM Community Summit 2020 for grantmakers active or interested in funding Asia and the Pacific LGBTI movement.

This virtual donor event on Monday, November 23rd is set to coincide with the Rights, Resources, Resilience Asia-Pacific Community Conference (RRRAP Con) 2020 and will bring together key public and private grantmakers, donor governments, high net wealth individual donors, philanthropic thought leaders, and other partners within the LGBTI movements of Asia and the Pacific. This convening aims to enhance the impact of grantmaking for LGBTI equality in Asia and the Pacific by fostering a shared understanding of the needs of the field through a deeper dive exploration of the 2017-2018 Global Resources Report data, identifying and encouraging opportunities for alignment and collaboration, developing strategies responding to current trends and opportunities, and working collectively to mobilize important new financial resources for the regions’ movements.

Register for the GPP and APCOM donor event!

*This is a grantmaker only space

Want a better understanding of LGBTI grantmaking? View our "Meet the Donors" video

Isikeli Vulavou is a development professional with over fifteen years of experience as a human rights activist and defender for LGBTQI Rights and Equality and key populations affected by HIV in Fiji and the Pacific. Isikeli uses gender neutral pronouns Ze/Hir and identifies as genderqueer.

Ze is the current Chief Executive Officer of the Pacific Sexual and Gender Diversity Network (PSGDN) – a regional network of LGBTQI networks and organisations from around the Pacific. Isikeli is also the Founder and Managing Director for the Rainbow Pride Foundation which is an LGBTQI-led organisation in Fiji. Ze was the lead convenor for two Pacific Human Rights Conference on SOGIE that was held in Nukualofa in 2015 and in Nadi in 2018.

Hir is well versed with the development issues affecting the LGBTQI community in Fiji and the Pacific and represents the community group at various high-level policy decision making spaces – from national to global levels.

Isikeli has about twenty years of combined programme management experience at the national and international levels with specialities in Gender Equality and Social Inclusion, Results Based Management for Planning, Monitoring and Evaluation, Advocacy, Communication for Development and Behaviour Change. Ze professional experiences includes working in government, the UN and with civil society.

Manisha Dhakal is the Executive Director and a founding member of BDS. Manisha was an active participant in the Supreme Court hearing in 2007, speaking openly about her experiences of violence, discrimination and stigmatization as a trans woman. She is one of the founding members of the Asia-Pacific Transgender Network, where she represents South Asia. She is one of the co-chairs of the ILGA Asia board, and a board member of IRGT, a global network for trans women and HIV. In 2010, she was awarded the Nai Ram Laxmi National Award for her contributions to the LGBT movement in Nepal, and she is also a Human Rights Campaign global innovator. Manisha holds a master’s degree in finance from Shanker Dev College, Kathmandu.
Close

Based in Bangkok, Midnight has been APCOM’s Executive Director since May 2011. With many years of experience working in multi-sectorial partnerships with governments, donors and the United Nations, Midnight particularly enjoys working with community groups and civil society organisations to build their capacity to better promote the rights of gender and sexual minorities.

Midnight’s work as APCOM Executive Director has been globally recognised through various awards and honors, such as Mark King’s MyFabulousDisease.com’s 16 HIV Advocates to Watch in 2016, “IAPAC 150” Pioneers in AIDS Response and AVAC’s Omololu Falobi Award for excellence in HIV prevention research community advocacy. At the 2016 UN High-Level Meeting on Ending AIDS, Midnight gave the Closing Plenary Statement representing civil society across the globe.

Before joining APCOM, Midnight worked for Purple Sky Network where he engaged with MSM and transgender communities in the Greater Mekong areas. He previously supported the implementation of HIV and human rights programmes in various countries throughout Asia and Eastern Europe as part of the International HIV/AIDS Alliance.

Phoebe (she/her/siya) is a queer Filipina migrant and feminist activist with a keen interest in youth-led political movements, cultural work, and student activism in Asia. She is the Program Associate for the South and Southeast Asia team at the Foundation for a Just Society (FJS), a U.S.-based private foundation that supports women’s rights, girls’ rights, and LGBTQI rights in Bangladesh, Myanmar, Nepal, and Thailand, along with other Global South countries. Prior to FJS, she was on the grantmaking operations team of the Burma Program and Asia Pacific Regional Office at Open Society Foundations. Phoebe conducted research on U.S. foreign policy and democratic processes in Southeast Asia at the Center for Strategic and International Studies and the National Democratic Institute. She holds a bachelor’s degree in international studies with a focus on Southeast Asia from American University. Phoebe is actively involved in transnational solidarity focused on anti-imperialism in the Philippines, reproductive justice work among Asian Americans and Pacific Islanders in the United States, and decolonization and anti-capitalism organizing among donors.
Close

Zack graduated with a Bachelor’s degree in International Relations in the hope of working on development issues in the Asia-Pacific region. Accidentally landing in the higher education sector, he specialised in educational development, learner-centred design, and teaching and learning with technology. Having a keen interest in the intersection of individual participation, new forms of expression and technology, Zack pursued a Master’s degree in urban development, focusing on how policy-makers learn and adapt new ideas in their own context. He has since worked in areas such as compliance in government procurement, eco-city policy movements and rural livelihood vulnerabilities. He started as the Linking, Learning, and Communications Officer for Voice Indonesia and Philippines, connecting different partners together to facilitate learning between them. He is currently the Regional Roving Grant Officer for Asia.
Close

The APCOM Community Summit 2020 will be hosted on 23-27 November 2020 through a unique hybrid conferencing which aims to gather 1500 offline and online LGBTQI, HIV and community health advocates, professionals, and authorities from across Asia and the Pacific. On 23-25 November 2020, APCOM is organising the Rights, Resources, Resilience Asia Pacific Conference (RRRAP Con) 2020 which covers a broad range of issues from the responses to HIV, the health and rights of vulnerable communities, and investment into the community. On 26-27 November 2020, APCOM is introducing Thailand LGBTQI+ Biz Forum 2020 which is envisioned to contribute to identifying entry points and strategies for increased LGBTQI inclusion in the private sector. As the final event, on the evening of 27 November 2020, APCOM is hosting HERO Awards which is a special fundraising gala where we honour community heroes within Asia Pacific for their response, passion and everlasting dedication for the human rights of LGBTQI community, and within the HIV sector.
Register for RRRAP Con 2020! 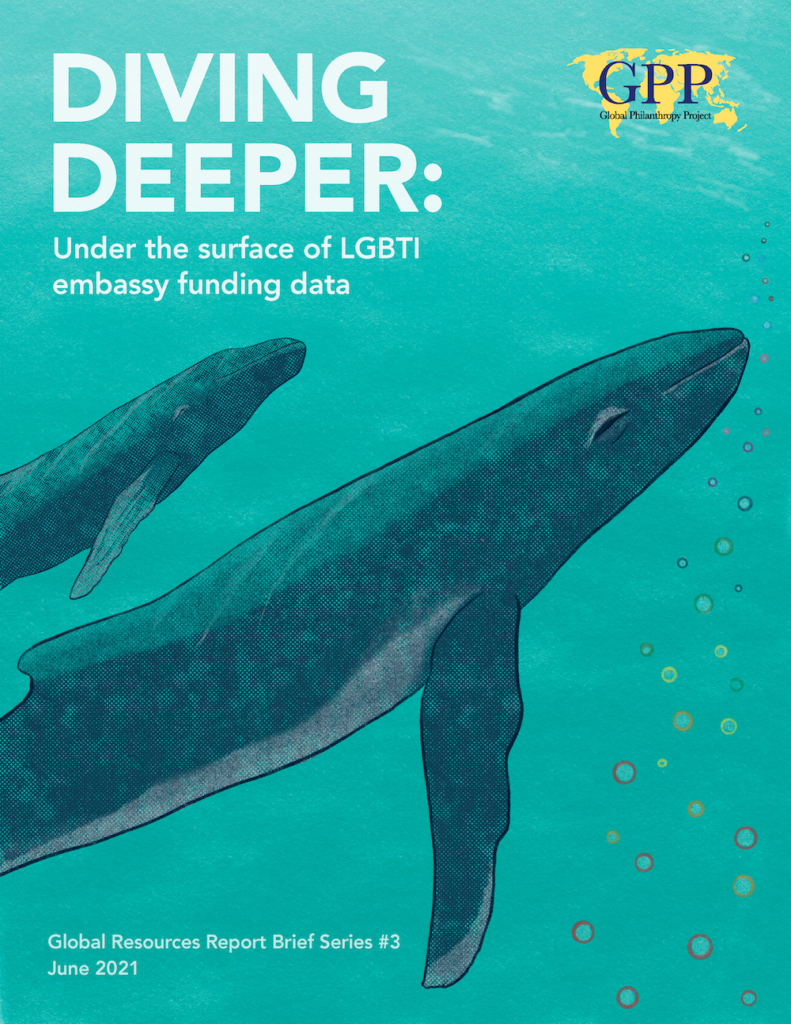 Diving Deeper: Under the Surface of Embassy Funding
June 2, 2021 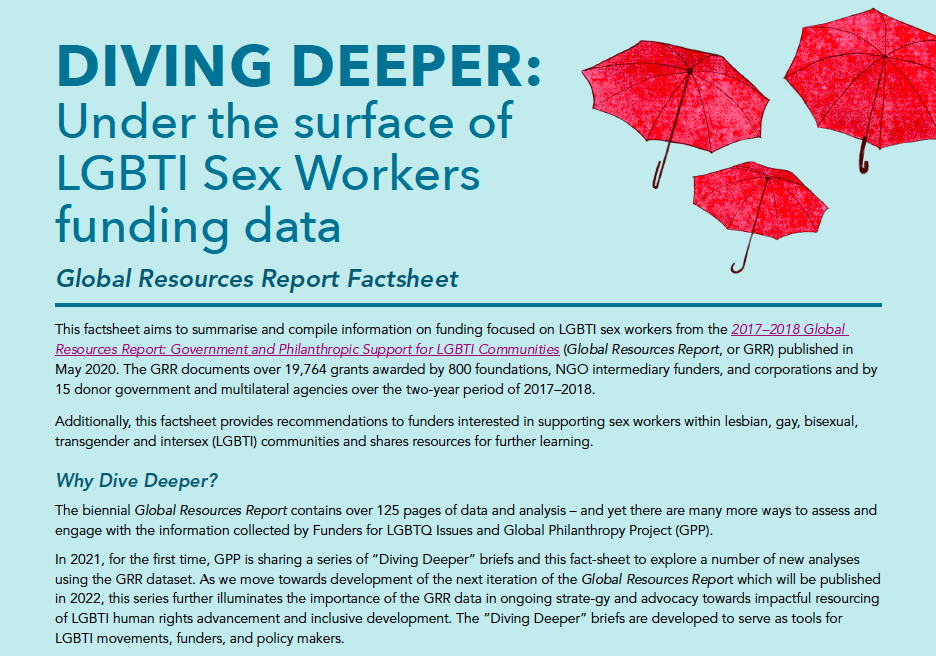 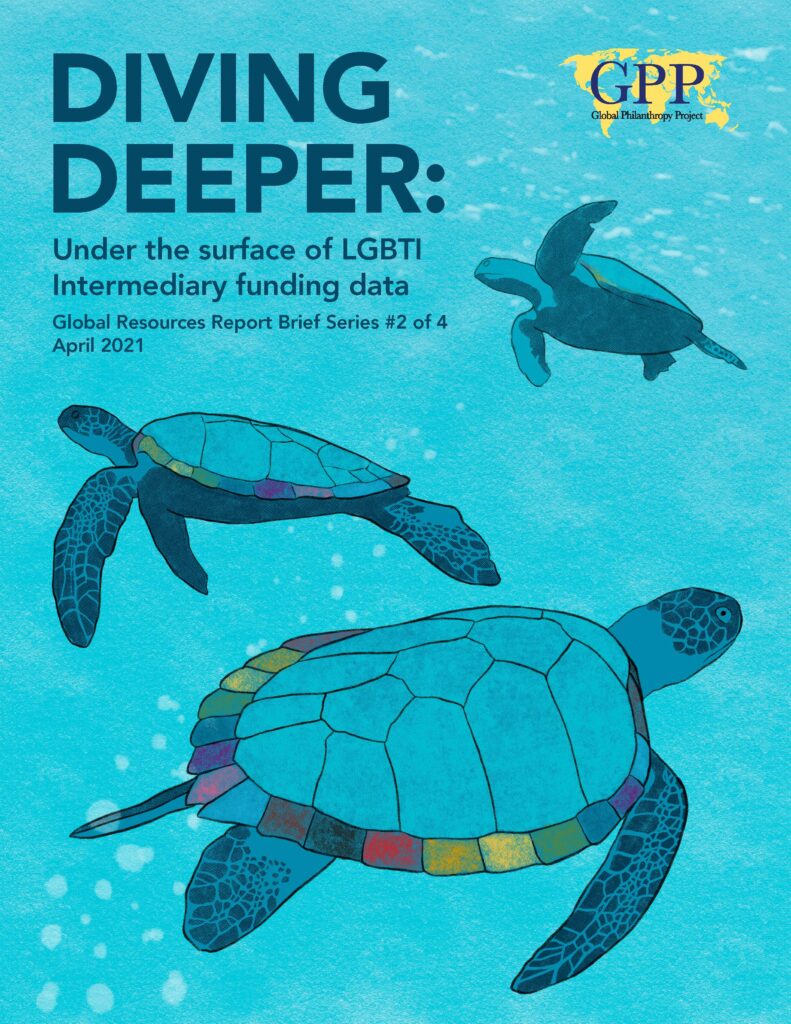 Diving Deeper: Under the surface of Intermediary Funding
June 2, 2021 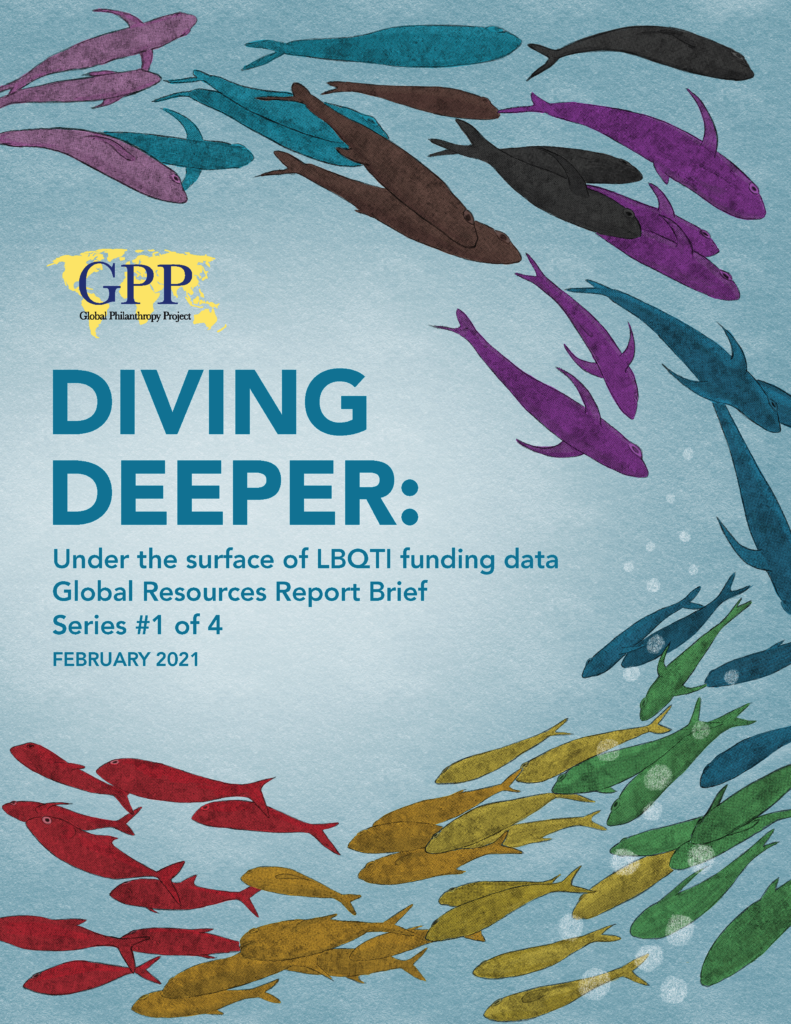 Diving Deeper: Under the surface of LBQTI Funding
June 2, 2021 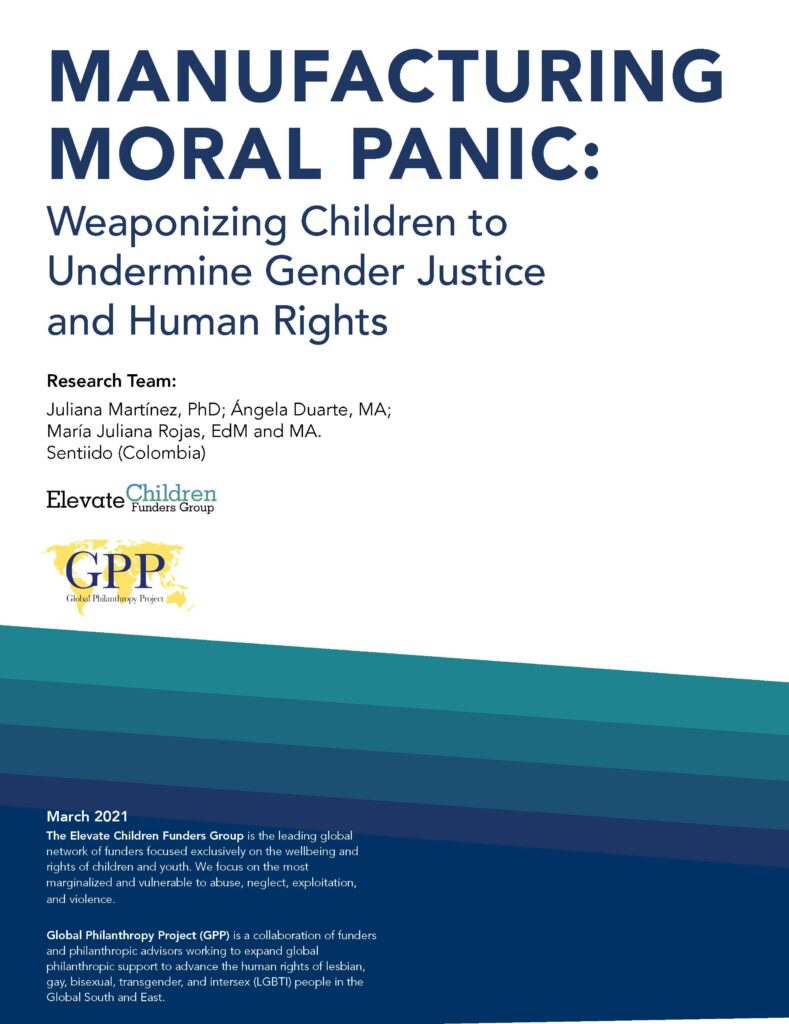 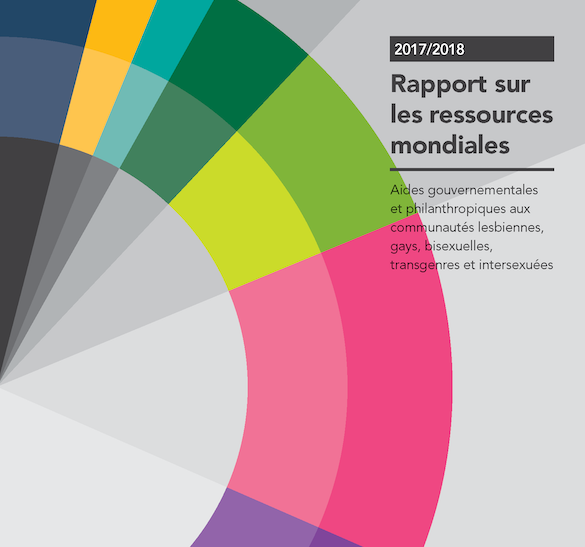 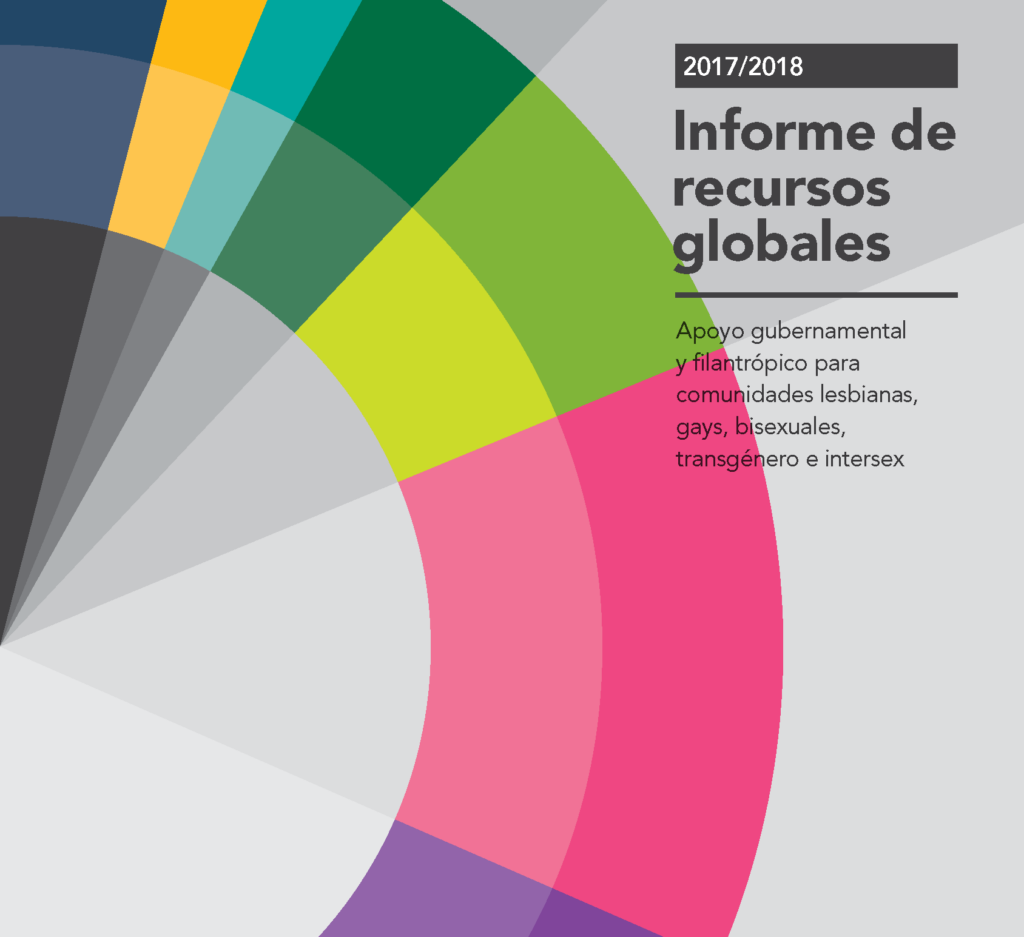 Diving Deeper: Under the surface of LGBTI funding data
February 2, 2021 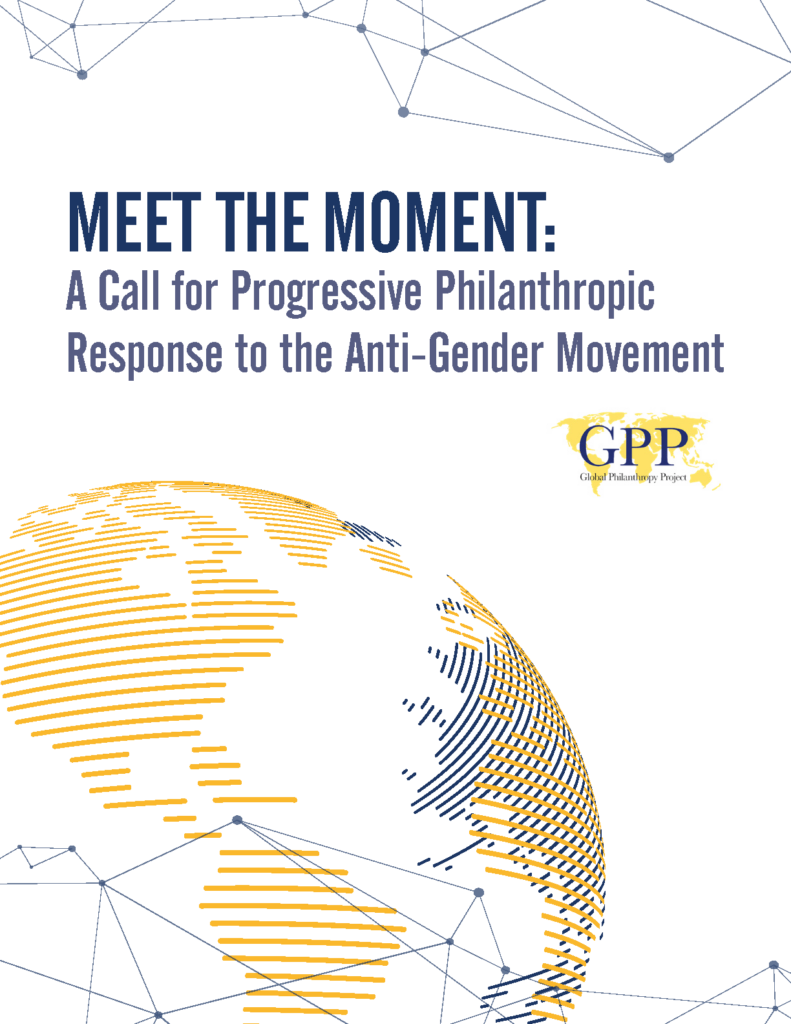 Meet the Moment: A Call for Progressive Philanthropic Response to the Anti-Gender Movement
November 12, 2020 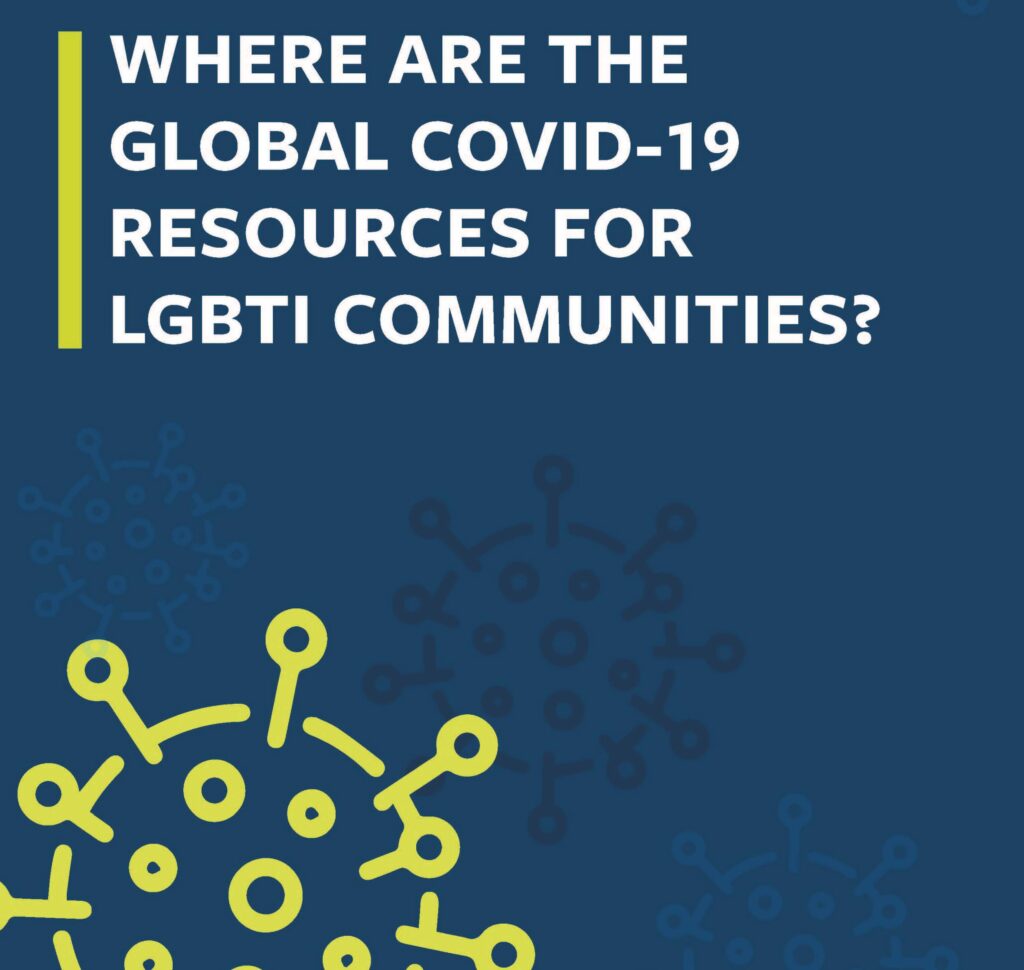 Where Are the Global COVID-19 Resources for LGBTI Communities?
September 1, 2020 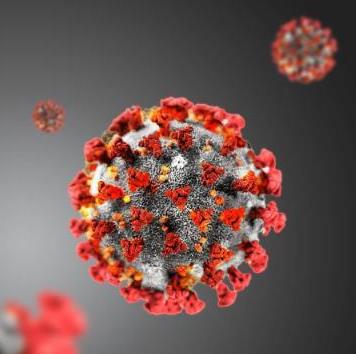 Resources for the Global LGBTI Philanthropic Response to COVID-19
May 19, 2020 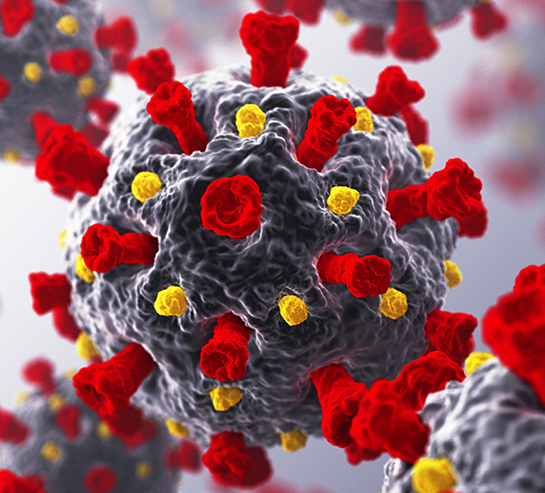 How is Global LGBTI Philanthropy Responding to COVID-19?
May 1, 2020 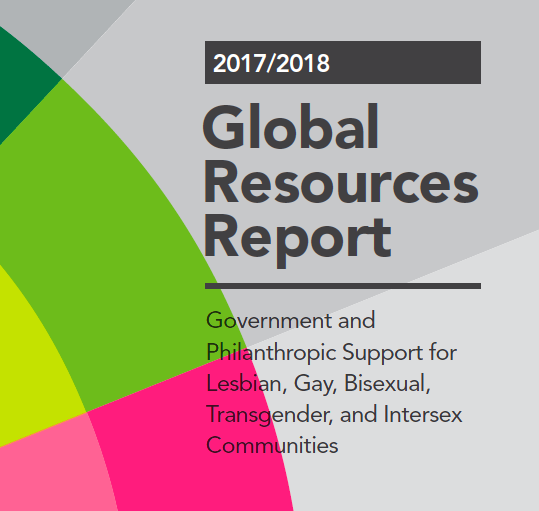 Global Philanthropy Project and Funders for LGBTQ Issues, May 2020 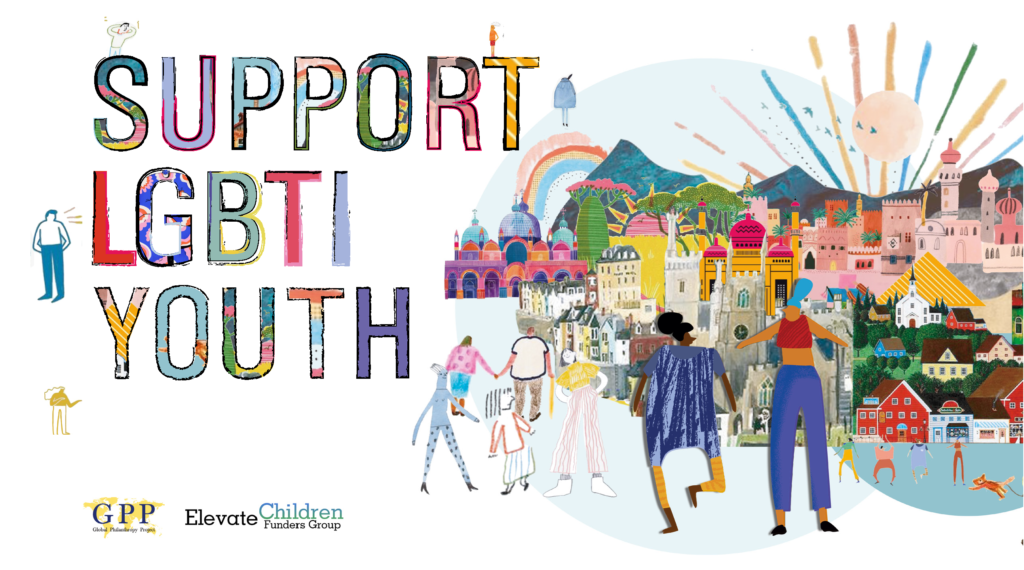 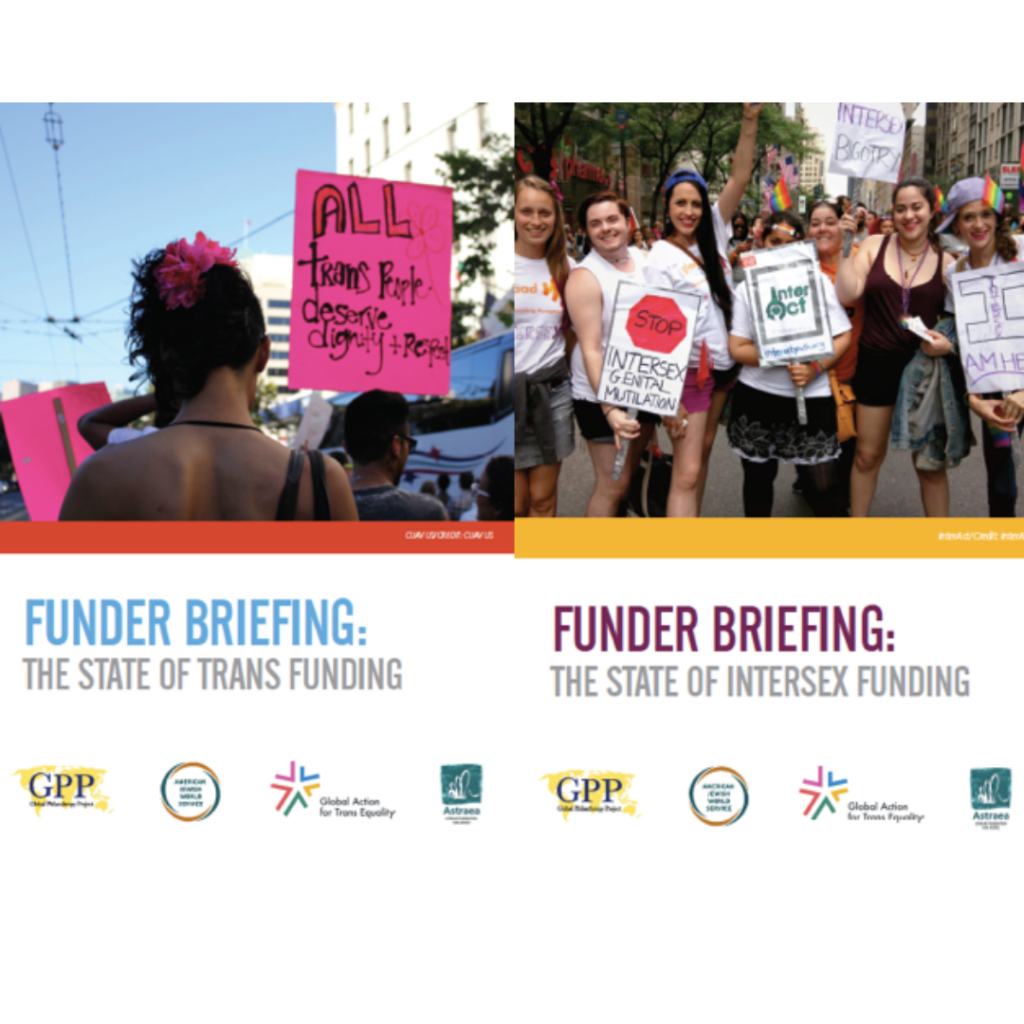 Funder Briefings: The State of Trans and Intersex Funding
September 13, 2019 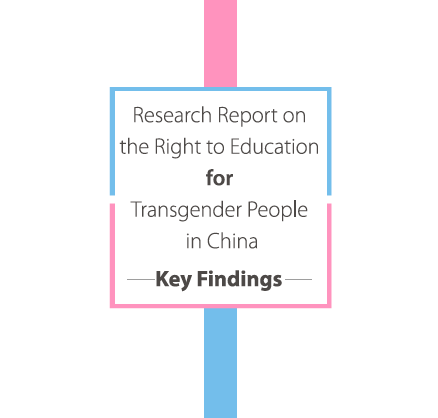 Research Report on the Right to Education for Transgender People in China
June 5, 2019 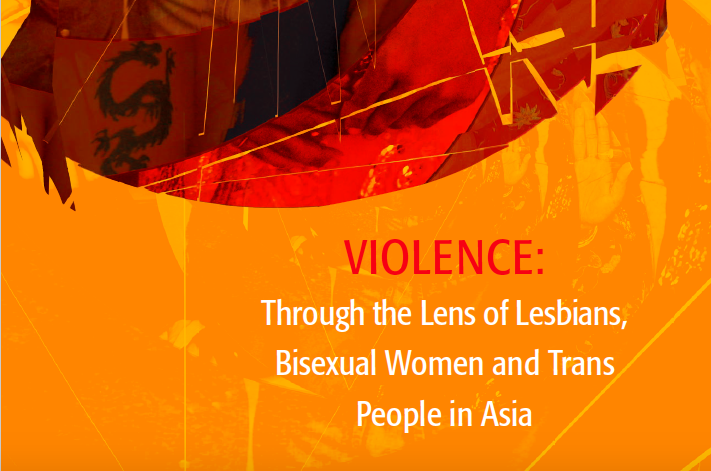 Violence: Through the Lens of Lesbians, Bisexual Women and Trans People in Asia
March 20, 2019 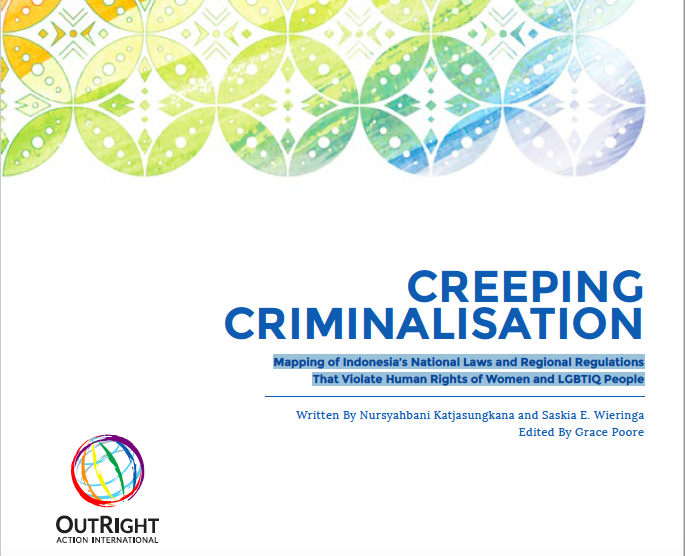 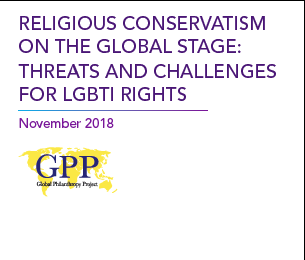 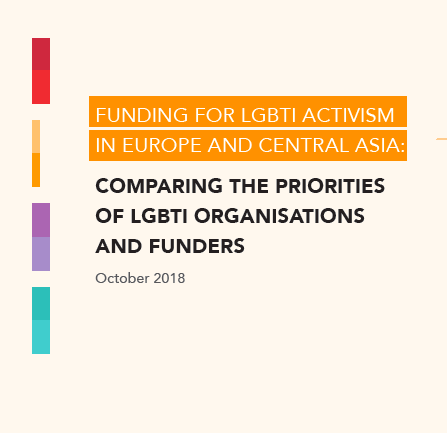 Funding for LGBTI Activism in Europe and Central Asia: Comparing the Priorities of LGBTI Organisations and Funders
October 23, 2018 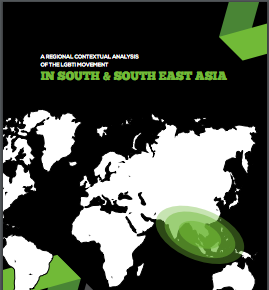 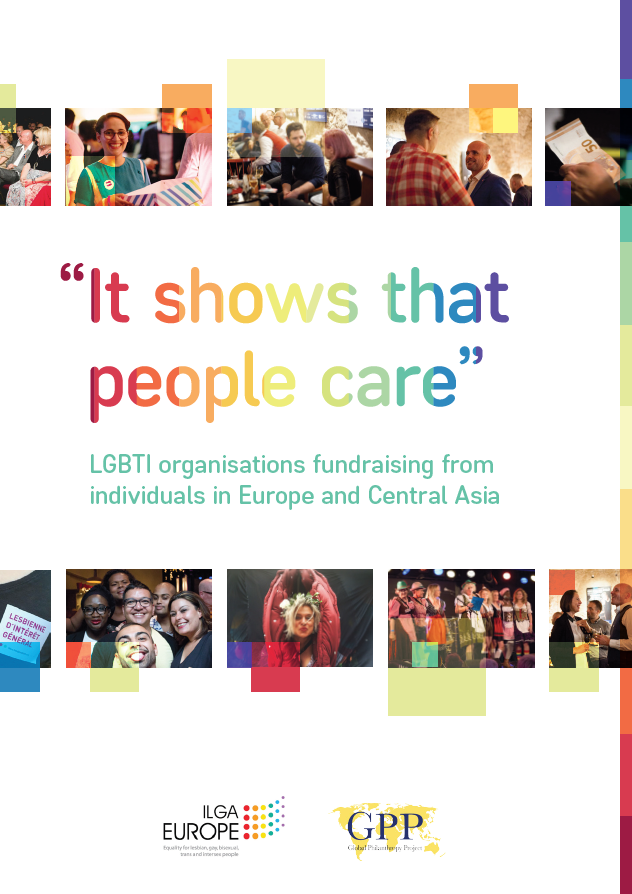 It Shows That People Care: LGBTI organisations fundraising from individuals in Europe and Central Asia
November 16, 2017

This new guide, developed by ILGA-Europe and the Global Philanthropy Project, includes an overview of fundraising, frequently asked questions, 10 case studies, and guidance and resources to start or improve your fundraising. 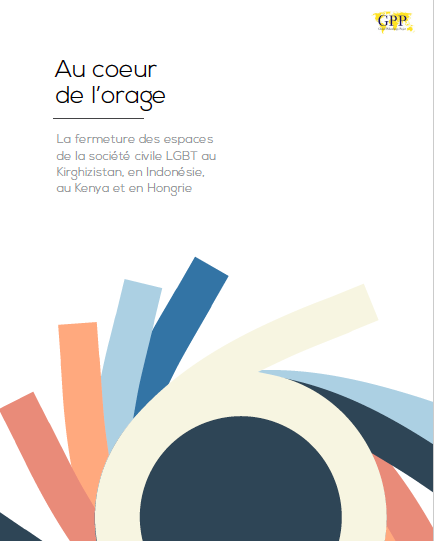 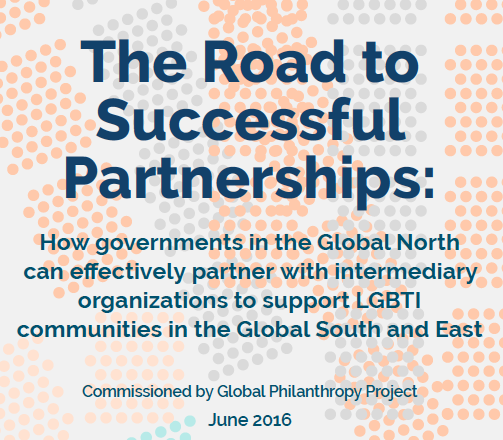 The Road to Successful Partnerships
July 3, 2016

How governments in the Global North can effectively partner with intermediary organizations to support LGBTI communities in the Global South and East; Commissioned by Global Philanthropy Project, July 2016 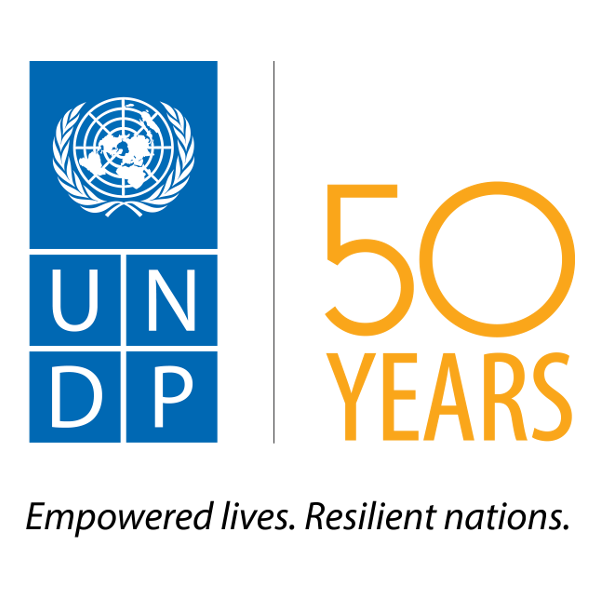 Being LGBTI in China: A National Survey on Social Attitudes towards SOGI & Gender Expression
May 19, 2016 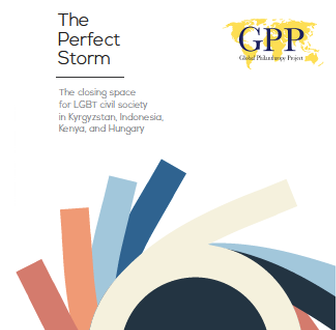 Report available in English and French 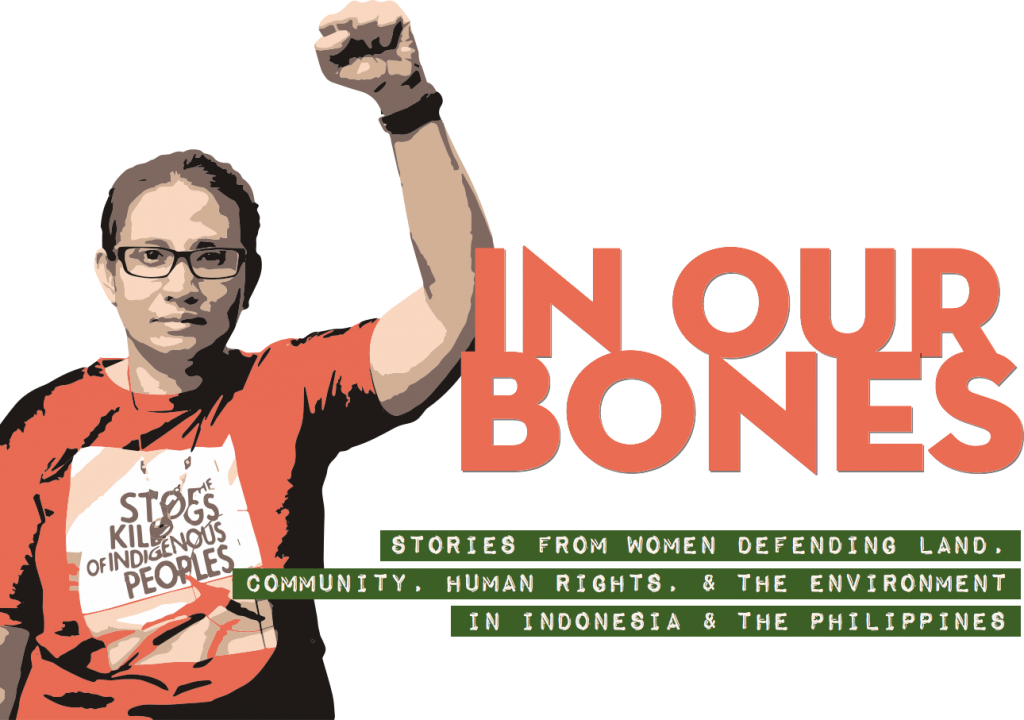 In Our Bones: Stories of Women Defending Land, Community, Human Rights, and The Environment in Indonesia and the Philippines.
March 26, 2016

Send this to a friend